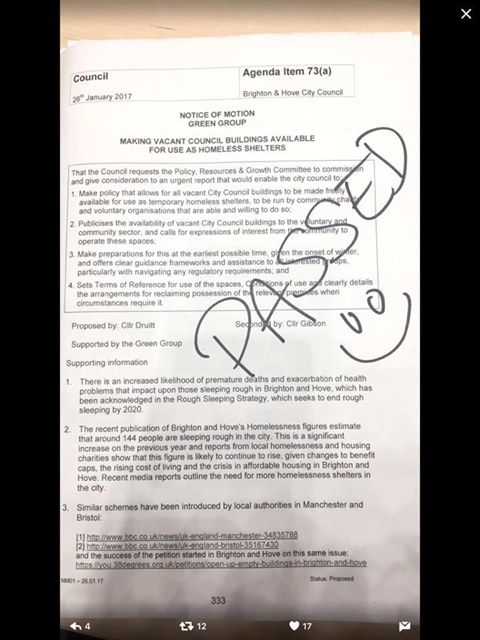 A motion for making vacant council buildings available for use as homeless shelters was put forward by Tom Druitt and seconded by David Gibson. It was unanimously voted on and passed on Thursday 26th January 2017. An urgent report will now be put together and heard at the next policy, resources & growth committee meeting.

We have been told by councillors that this is unlikely to be ready in practical terms until next winter. In the meantime we plan to keep the pressure up on the council with regard to (SWEP ) Severe Weather Emergency Protocol.

To support in keeping the pressure up you could consider emailing jenny.knight@brighton-hove.gov.uk and clare.moonan@brighton-hove.gov.uk to express (or demand) that the council must change their arbitrary decision making process when deciding whether to activate SWEP or not. They should be applying the charity ‘Homeless Link’s guidance of ‘Extended Winter Provision’ from November through to February for folk living on the streets. Instead of waiting for it to be below zero for three consecutive nights. They need to consider the rain, wind and other conditions which also have a severe impact.